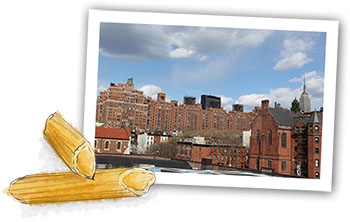 I sublet an apartment through Craigâ€™s List, and the plan was that I would meet the owner’s friend there to get the keys. Iâ€™d paid up front. Three monthâ€™s rent to a total stranger on the internet.

â€œDoes this address make sense?â€ I asked the taxi driver. â€œItâ€™s not in the middle of the river is it?â€

And amazingly the friend of the owner was there to meet me with a whole bunch of keys and we lugged my suitcase inside. â€œOh, just so you know,â€ she said. â€œThis is a totally illegal sublet. Itâ€™s really important that the management company Never Finds Out youâ€™re doing this, so try to keep a low profile and if anyone asks, can you say you’re Melinda’s British cousin staying for a while?â€

She was so confident, so matter-of-fact about it, and I was so jet lagged, so beyond reason and too fragile to voice my concerns.Â An Illegal sublet? I was horrified. I had paid all this money and now Iâ€™d be sneaking in and out like I had no right to be there. I didnâ€™t know how common a situation this was in the city. It took some getting used to.

of course, I had left the bit of paper with my address and the phone number of the ownerâ€™s friend, along with my cell phone and in fact, all my belongings, in the mystery apartment.

I hovered around the entrance for a while, panic mounting, then I wandered up and down the street feeling conspicuous and suspicious. I was sure the doormen were watching me, ready to report my illegal subletting activities to the police. I would lose the apartment. I would lose all that money. I would be deported. Probably after Iâ€™d been sent to prison. I started to whimper.

There was an Italian restaurant on the block. I sat down next to a couple who were both tucking into something that smelled divine. I didnâ€™t need more uncertainty in my life. I didnâ€™t even look at the menu. â€œIâ€™ll have that, please.â€ It was penne alla vodka.

Truly this is the pasta that bolsters, comforts and seduces. A dish that makes you feel loved when you eat it,Â irresistibleÂ in that Lady and the Tramp way, simple, reassuring, confident sexy food.

2 medium onions
Â½ tbsp butter
Â½ tsp â€“ 1 tsp sugar / tbsp of milk â€“ these are both ways to bring out the sweetness and reduce the acidic rasp of the tomatoes. Canned tomatoes seem to usually need some help.
1 fat clove of garlic (peeled)
1 large can or 2 normal sized cans of tomatoes – I use whole plum tomatoes and chop them in the can by wiggling my knife around. My brother-in-law once worked at a tinning factory and tells me that the tomatoes that werenâ€™t good enough to be canned whole went into the chopped and crushed tins, so Iâ€™ve fastidiously avoided them since. 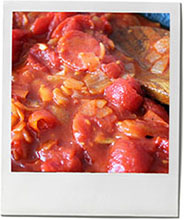 For a creamier sauce (Iâ€™ve had creamy versions at several Italian restaurants) add 1/4 cup marscapone or Â¼ cup of cream to the tomato sauce mixture when you add the vodka.