This Dinner Will Get You Laid – Profiteroles,Oscars and an unlikely celebrity haunting 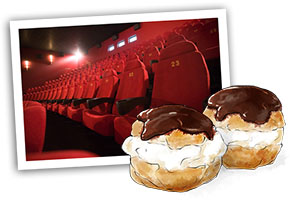 As the Oscars approach, we naturally become more concerned with movies and their stars. Some of us, more literally than others.â€œI believe that a personâ€™s energy can linger after theyâ€™ve gone, and haunt the place they inhabited,â€ said a guy, apropos of nothing, as we sat at the bar.

â€œTake my apartment, for example,â€ he expanded. â€œIâ€™m in it, and suddenly, I feel this spirit. Itâ€™s hard to explain. But itâ€™s a good omen, because Iâ€™m a very creative person, and so was she, so itâ€™s all this amazing creative energy in my apartment. Sometimes things rattle, sometimes there are strange noises, sometimes I feel breezes. The spirit is very intense.â€

It was hard to know what to do with this information.

Eventually I tried, â€œhave you told your landlord?â€

â€œOh, he knows all about it,â€ said the guy. â€œHe has this actual picture of Susan Sarandon living in my apartment. Sheâ€™s young, in her early 20s. Itâ€™s when she first moved to New York. He showed it to me before I moved in. Heâ€™s really proud of it.â€

It took me a moment to make sense of this. â€œSo your apartment is haunted by the spirit of Susan Sarandon?â€ I checked.

We drank in silence, while I gave these claims some thought. Crazy as it sounded, I rather liked the idea of having a 20 something Susan Sarandon apartment spirit. Think of the fun we could have. We could duet to Rocky Horror, for instance.

But no dead or living celebrities have ever inhabited my apartment, and I can go about my Oscar party cooking un-enriched by supernatural presence.

I’m making a spin on last year’s cocktail food – with the addition of mini truffled mac n cheeses and these mini profiteroles.

For the Choux Buns

For the chocolate sauce and filling

This entry was posted in This Dinner Will Get You Laid, Uncategorized and tagged chocolate, cocktail, ghost, ice cream, oscars, party, profiteroles, Susan Sarandon. Bookmark the permalink.