I have a soft spot for cherries thatâ€™s firmly rooted in my childhood. 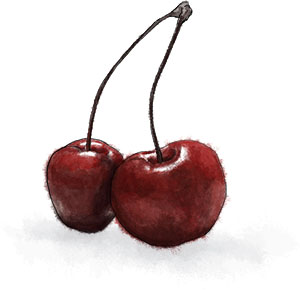 The skirt with the net underskirt, spotted with cherries, that I wore to the Headlands Hotel Disco. Cherryaid at birthday parties (the only time my sister and I got free reign to choose beverages). A cherry-scented eraser that was all the rage at school until they were banned because the chemicals made us all go hyper. Â Iâ€™m still partial to a cherry jelly sweet or a lick of cherry lip-balm. I eat maraschino cherries out of the jar and pour their syrup into club soda on hot days.

My mother loves cherries too, in their purest form. I remember her buying bags to share with my sister and I on summerâ€™s days, when the thought of climbing the stairs to our front door was just too much. We would sit in the car, singing along to Tell Me On a Sunday, and spitting stones into the garden; â€œmaybe theyâ€™ll grow.â€

New York is having something of a cherry bonanza at present. Weâ€™re in the final few weeks of bright scarlet Bing season, but getting the first crops of the yellow blushing Rainiers, and well into claret Sweetheart territory. My local fruit stand has them all on discount. While a handful served in a bowl of ice water to keep them chilled would be a perfect Monday treat as far as Iâ€™m concerned, this salad is delicious, fairly low effort, and completely worth it. The cherries really shine. 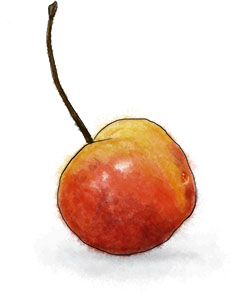