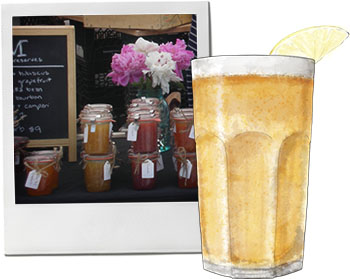 Did you have a good long weekend? It’s such a lovely feeling to be at Wednesday already, gearing up for mid-week drinks. If only all Mondays could be spent sitting on the balcony reading Marie Claire and planting out the rosemary.

Here’s one thing that I didn’t know when I was a teenager, and I wish I had; if a boy sends you a letter with “love” at the end that’s not an accident; he Likes you.

So I’m almost automatically programmed to want a lager shandy, which is simply lager with a splash of lemonade in it – I do about ¾ lager to ¼ lemonade, but I think ½ and ½ is what you’d get if you ordered it in a pub. I also like to add ice cubes and a squeeze of fresh lemon juice.

It’s lucky then, that my long weekend inspired the perfect snack to go with a cold beer.

“I’m from Manhattan, I just want my coffee the way I want it. It’s like when you go out for a steak and you want it well done and the chef won’t cook it. Don’t you be telling me that it’s better this way, that it preserves the integrity of the taste. I know what tastes good to me! Chefs I can kinda take. It pisses me off but I can take it. But Baristas? Hell no. See, now I’m crabby. I really need a coffee!”

Then we walked home via a “loft sale” where Ingyin bought some swords, and I developed the kind of sunburn that makes people wince to look at you.

But of all the memories of that day, it’s the sample of lemon mayonnaise that I had from Empire Mayonnaise, (http://empiremayo.com) that I keep coming back to. I should have bought some. It was so delicious and tangy and someone else washed up the blender. But now it’s stuck in my mind, I’m going to have to make some and drag the cuisinart off the top shelf of the bedroom cupboard (NY living, right there). Ah well, small sacrifice for ambrosial taste.

People who have never made mayo tell me that they are nervous because it’s inevitably going to split. I’ve been making it for 13 years, and it never has. But if it does, folklore says whisk in an ice cube and that should fix it. But positive thinking. It won’t spilt. It won’t.