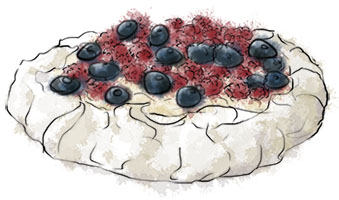 Jenn and Alan had bought the tickets on Groupon, and the time was non transferable, so in spite of the thunder and lightening that had lashed Manhattan all afternoon, we set off down to the docks to meet our ferry.

This was one of those tourist cruises up the side of the island, round the statue of Liberty and back again, accompanied by tropical cocktails and 80s music. Determined to make the most of it, we sat on the partially covered upper deck drinking pink drinks, and huddling under umbrellas that we lined up along our legs as a protective shield.

The dark water surged in the storm as we sat on the quay.

“We’ll be ok,” said Alan confidently. He can fish things and hunt things, so he’d be a useful asset to island life.

“I could build a shelter,” suggested Jon, with a the kind of gleam in his eye that suggested he might quite like to give that a try some time.

“Um, I could cook,” I volunteered. I’ve been on Guide Camps. I know how this goes. So that left poor Jenn wondering whether we’d eat her straightaway or let her make cup holders and draining boards out of bits of wood for a few weeks first. 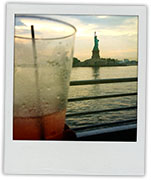 As the ship set sail, the rain miraculously stopped, like a reverse Noah’s flood. The clouds rushed away. A rainbow arched over New Jersey, which is not a bad title for an autobiography now I think about it. And we sailed out into the sun.

This is a showstopper of a dessert, and it’s easy to make – bit of a win win really. 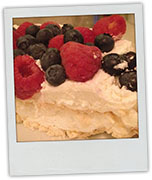 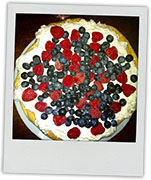 This entry was posted in This Dinner Will Get You Laid and tagged 4th July, bbq, berries, cruise, dinner, eggs, entertaining, meringue, party, pavlova, shipwrecked, summer. Bookmark the permalink.