The Monday Treat – Lemon Bars and the subtle nuances of Karma 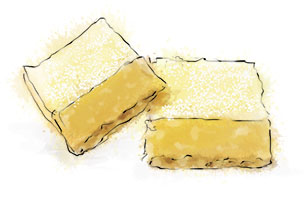 An actress friend of mine is up for a “part of a lifetime” part. It’s only the first round of auditions, but already she is 2 parts hopeful and 1 part crazy; “It’s my time. I can feel it. Unless. Do you think they think my look is too blonde?”

She’s embarked on a campaign of Karma improvement – buying coffees for homeless guys, clearing away other people’s litter left on tables, calling her mom regularly, eating the orange chewy vitamins so her husband can eat the strawberry ones. “I gotta persuade the Universe I deserve this part,” she says. “It can’t hurt.”

This experience resonates with a lot of my friends, actors or no.

“Once I had a job interview, so I wore high heels,” Grace told me as we headed out to a book reading in Brooklyn. “By the time I got to the subway my feet were killing me, and I really wanted to sit down. There was an old guy who was clearly just about to get up, rolling up his newspaper, buttoning up his coat.  So I edged closer to his seat.

And then I noticed. Another woman was doing the exact same thing.

We stared at each other, waiting for one of us to back down, but I was quicker, and when the guy got up, I got the seat! I was a winner! I was feeling great! It was basically a metaphor for my interview – I would edge out the competition just like I edged out that other woman. I would get that job like I got that seat.

Unfortunately, the other woman was my interviewer.

It’s made me way more aware, you know. Which is why you are sitting on the subway, and I am standing right now.”

To improve my Karmic debt, later, I made these lemon bars and gave her a box full.

Lemon Bars are a two step process: First you make and bake the crust, then you top with lemon filling and bake again. Neither of these things is hard to do, it just takes a little time, so it’s the perfect thing to make if you have a clear hour, and something good to listen to on the radio.

This recipe is based on a Martha Stewart classic, which I love because it is very lemony – if you’re not such a lemon fan, she suggest using ½ cup milk and ½ cup lemon in the filling instead

This entry was posted in The Monday Treat and tagged interview, karma, lemon, lemon bar, luck, spring. Bookmark the permalink.